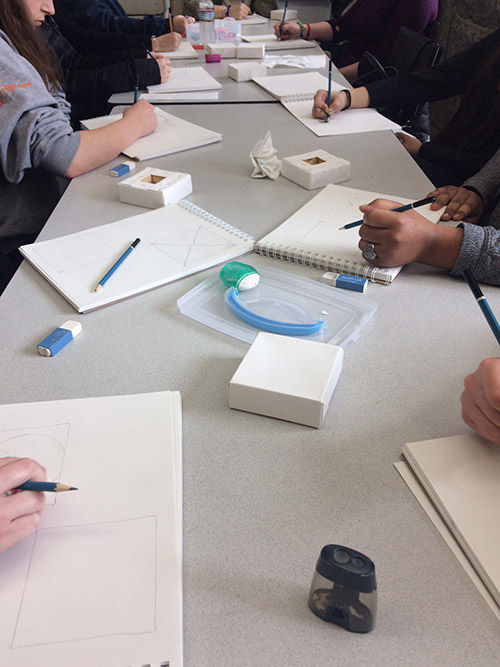 The Brush has a long-standing program called Special Perspectives which brings art instruction to challenged groups. Current recipients of this program are Megan’s House and Recreational Adult Resource Association (RARA). We have also administered this art program to Towards Independent Living and Learning (TILL), and YouthBuild Lowell (a division of Community Teamwork, Inc.) in the past.

The Brush mission statement includes: “to use art to focus attention on important social and environmental issues.”

Four by Four for Education

Each year we ask visual artists to create one 4 by 4 inch work of art. The Brush provides a blank, stretched canvas. Artists chose whatever media they want. The canvases are raffled to raise money for this program. Who Benefits: The Four by Four raises funds for a $1000 scholarship granted to a deserving UMass Lowell art student. The remainder goes to Special Perspectives programming which brings art instruction to challenged adults, currently Megan’s house, a transition program for young women recovering from addiction. .

The program was originally funded by the Nathanial and Elizabeth P. Stevens Foundation. Artist studio space is offered at a subsidized rate to an individual who demonstrates an aptitude in his/her art form. In addition, the artist must add cultural diversity to our group of studio artists. Recognizing that each ethnic group adds its own fascinating characteristics that make us different, the Brush is committed to increasing diversity by adding more individuals who are typically underrepresented. The accepted artist is offered a studio at a substantially discounted rate for one year.

The Brush as an Incubator

We have been an incubator for several programs which were eventually adopted by others. The Elder Art Initiative, which is run by Pamela Wamala, was originally a Brush program. Visual Voices, a biennial city wide exhibit for school kids was originally conceived by Lolita Demers and was a Brush program. It’s now run by the Lowell Public School system.